7 things you NEED to know about LAST Conference Canberra 2018! 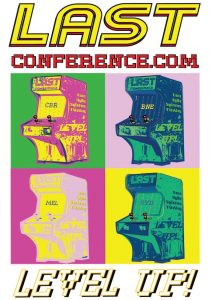 The theme for 2018 is ‘Level Up!’ and while that primarily describes what we hope our attendees will get out of it, we’re really hoping the conference itself is going to be even bigger and better this year too!

The Seven Things you NEED to know about LAST Conference Canberra 2018:

Well that’s a little bit about us (for now)… Excited yet!? 😉

How can YOU get involved?

Well, firstly grab an early-bird ticket to avoid disappointment. Early-bird pricing will save you $20 off the normal ticket cost – this discount ends on 15 August.

Got a talk in you that you’re itching to get out and share with the Lean, Agile and Systems Thinking community?  We’d like to hear about it.  Don’t delay! – submit a proposal for a talk through ConfEngine here.

Please follow us on social media.  We’d really appreciate some likes, retweets and reposts – keep an eye out for posts coming soon. Follow the links in the menu to the right for all our social media accounts.

Get ready to Level Up!  It’s gonna be a blast.

This entry was posted in News.

The world of work is changing, and we think that the LAST Conference is a great way for professionals in Canberra to tap into the discussion that is happening in Australia and around the world. We talked to local organisers, Mia, Matthew and Alex about bringing this event to Canberra for the first time on 14 September 2017.

You may have recently heard about ANZ’s “New Ways of Working”, where they are rethinking many of the ways their business operates:

Most of the things talked about, such as responding quickly to customer needs, and enhancing staff engagement, have roots in agile software delivery and the lean manufacturing methods that helped Toyota in the post-WWII, era.

In Canberra, we have seen a rise in the level of interest for lean and agile principles and methods. Added to this, Complexity Theory and Systems Thinking, are also areas that can be applied to the types of work that we see here.

LAST Conference Canberra will be held for the first time ever, on 14 September, at ANU. LAST stands for Lean, Agile and Systems Thinking. The event started in Melbourne in 2012, and has since been staged twice in Sydney. Joining Canberra in 2017, will be Brisbane, later on in September.

The concept has always been about an affordable, community based event, where practitioners and those who want to learn from them, gather to exchange ideas and share experiences. The meetup scene, has been particularly important in bringing together like-minded and curious people at LAST. The agile meetup scene in Canberra has been blossoming, with these groups leading the charge:

Core principles of the LAST Conference concept are:

A number of people in Canberra have come together to form the organising and program committee of LAST Conference Canberra. These include Irene Zhen, John Connolly, Stuart Hume, Stephen Morgan, Matthew Hodgson, Mia Horrigan and Alex Sloley.

Matthew Hodgson and Mia Horrigan have been going to LAST Conference in Melbourne since 2013, and their company ZXM believes strongly in giving back to the community.

“We love agility and believe strongly in openly sharing our knowledge with the public. It not only fosters growth in us, but also our peers. Our time and information is given openly to those who need it and we feel that’s the #1 way we can give back to those around us.“

Alex Sloley is an agile coach, originally from the USA, who now calls Canberra his home. He attended LAST in Sydney and Melbourne for the first time this year and is now involved in the organization of the Canberra event. He is deeply involved in the agile community and the associated continuous learning that he enjoys from it, both giving and receiving. These grassroots efforts build a network of support that Alex relies upon to help him be a better agile coach and agilist.

“I think that the time is right for Canberra to get on board with this concept. We already have a bunch of people getting together to discuss working with greater agility at meetups. Expanding to a day of community and practitioner led presentations and interactions, is the next logical step. I’m really looking forward to it bringing the Canberra community together.”

Norman Bodek is a teacher, consultant, author and publisher; he founded Productivity Press, and is currently President of PCS Press.

He is known as “the Godfather of Lean”, having had the writings of many of the famous Toyota Production System creators, translated into English. He has published over 100 Japanese management books in English, and taught the Best of Japanese management at Portland State University. He’s been to Japan over 80 times and is uniquely placed to pass on his wisdom about lean, from his vast experience.

Norman is based in the Pacific North-West of the USA, and will be joining LAST Conference Canberra via video from his home in Portland.

Following Norman’s talk and Q&A, the rest of the day will be split into 2 streams. The lineup is a mix of Canberra practitioners and also colleagues from interstate. They include:

Mia Horrigan – ScrumDiddlyumptious & The Killjoys: lessons on cultural change, agile mindset and  how two teams on the same large scale agile transformation project could be oh so different

Finn Blucher – Do less with less, but mean more

Matthew Hodgson – Scaling Agile in Government: The good, the bad and the ugly

Melinda Harrington – Why you weren’t Agile before you were Agile

Registrations to LAST Conference Canberra are now available, and are priced at less than $150. You can find out more and secure yourself a registration at:

This entry was posted in News.

LAST Conferences are a signatory to the Diversity Charter.

Connect with agile and lean meetup communities in Canberra, Brisbane, Sydney, and Melbourne

LAST Conference Canberra 2019 is organised by local Agile practitioners and supported by Tabar.