As mentioned in this post, planning for LAST Conferences around Australia is in full swing. Melbourne is no exception, so we are here with news about what’s happening for the different cities in the lead up to 30 July.

We love to Experiment

From time to time we evolve the format; changing, adding, removing. Things that have been tried include, adding remote opening speakers via video link, running agile Developer workshops, FOMO by lots of concurrent streams, encouraging people to bring games, and running a version of the Agile Battle of the Bands night.

We’ve decided to go to a single day event in Melbourne in 2019. This is in order to support our latest innovation. LAST Anywhere, a program of remote-friendly events with content drawn from the LAST Conference “physical” events and the ecosystem we operate in.

We think that improvements in technology and changes in the way that people work, that allow people to work together anywhere, and to communicate and learn, mean that it’s a good time to explore the possibilities that arise from this.

Although LAST Conferences in cities around Australia, in general, act quite locally, we realise that they are also a part of a wider community. We also realise that people in regional Australia (or not in Australia) might not have access to something like LAST. We decided we want to enable people who are not close to a city that Conference is held in, to be a part of what we are doing.

Increasing the remote friendliness of our community can help people in other ways. You may have limits on your mobility, not be free on the date we run the event or be otherwise constrained.

Another aspect is that we wanted to bring what we believe about product development (frequent delivery that fast feedback) to apply to the type of learning that LAST Conference does. That’s why we have returned to one day for the Melbourne event, with more LAST Anywhere events, throughout the year.

LAST Anywhere will be coming later in the year. The website will have a new look in the coming days. We’d love for you to be part of it and share your feedback about it with us.

We are very happy to announce the first company to support LAST Conference Melbourne 2019. It’s 460degrees, an “expert management agency inspired by personal development and business transformation”. Simon Bristow, their Agility Transformation Champion, will be a familiar name and face to many of our participants. They are Supporters of Conference in Melbourne on 30 July AND they are founding Passionate Supporters of LAST Anywhere.

More supporters are lined up, and we will announce them soon. In the meantime, if your organisation would like to be part of LAST Conference Melbourne this year, please email us.

As a community driven event, LAST Conference Melbourne relies on people like you to get involved by submitting an idea for a session, or registering to participate and attend on the day. Session submissions are open now at our ConfEngine page. Registrations are now open for people who came to 2018’s edition (you’ll receive a code to unlock registrations, with general registrations opening at 9am on Thu May 23, 2019.

For a couple of years, we have run workshops that allow participants to learn or brush up on important technical skills that support agility in software development. Technical excellence is at the heart of agility, so it’s important to us to offer this for the community.

The format of the sessions is inspired by the Coderetreat movement, with some changes that have been introduced by the facilitators of the sessions, especially the Refactoring session. Unlike the official Coderetreat days, we do charge a registration fee. This is mainly to cover costs. At $120, we really think this it’s a really affordable opportunity to learn from some great, experienced colleagues.

Nevertheless, we want to encourage people who might find the registration cost prohibitive, so are sponsoring a number of free or discounted seats.

We envisage this to be for University (especially Swinburne) students, very recent graduates, those who have been between jobs or are switching careers, or people who may be from what could be considered under-represented groups. In general, if you are in paid employment, where your employer would pay the registration fee ($120), you would not be eligible for this application process. Register here.

NOTE – Applications will close at midnight on Tuesday 10 July. 5pm on Thursday 12 July.

There is also more, general information in this blog post.

This entry was posted in LAST Conf MEL 2018, news.

Dan’s article originally appeared on his blog and is re-posted with permission.
Dan and Jemma Ritchie will be running a session called, “Levelling up management: Beyond carrots, sticks, and kumbaya” at LAST Conference Melbourne 2018
If you would like to attend: 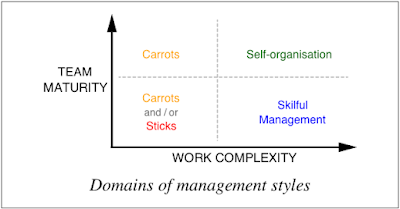 It’s over 50 years since Douglas McGregor introduced his Theory X and Theory Y characterisation of managers, or — as we might say today — management mindsets.
Theory X managers believe that people are largely extrinsically motivated, by rewards (yummy carrots) and punishments (beatings with sticks) and accordingly must be strictly managed. By complete contrast Theory Y managers believe that people are intrinsically motivated by the likes of Connection, Automation, Mastery, and Purpose, and function better when given support and encouragement.

In principle Theory X managers tend to favour a command-and-control style of management, while Theory Y managers will opt for self-organisation and servant leadership, sometimes parodied as everyone gathering around the campfire singing kumbaya.

The risks of Theory X command-and-control management are well-documented when it comes to knowledge work: demotivated, uncreative employees.
On the other hand the risk with “the stand back and let it happen” style of “management” as an attempt at Theory Y is that if self-organisation doesn’t spontaneously break out there can be a strong tendency to fall back into command-and-control. This is particularly the case when the manager doesn’t have any other strings to her or his bow.

Context is at least as important as individual mindset.
In a crisis for example, command-and-control can be appropriate. But be very wary of a manager who manufactures crises to justify a preference for personal control. Carrots and sticks can be also be effective for low-complexity work. [Here I’m using complexity as a catch-all for volatility, complexity, uncertainty, and ambiguity (VUCA).]
For high-complexity work a mature, compatible, motivated, and suitably skilled team can figure out what to do and how to do it. In this context self-organisation is key and the management role reverts to setting overall direction and providing outward facing support. In this happy context, kumbaya management works.
But what if the team is lacking in the necessary maturity to self-organise, or is short on a few key skills? Throwing them together and hoping that they gel seems like a dubious bet. That’s where skilful management (and coaching) can be of great value.
In the short term, a skilful manager can act as glue and internal support for the team while also helping them to develop in maturity to the point where they can self-organise without additional managerial support.

Really skilful managers adapt to the people and to the context. Working with people is a complex endeavour in itself and the wise learn from experiment as well as theory.

* * *
Astute readers will have noticed that I haven’t defined skilful management (yet) … stay tuned.

This entry was posted in LAST Conf MEL 2018, sessions.

If you’re the kind of person who wants to know what is on the program of LAST before you register, head over to ConfEngine to see the Accepted Sessions for LAST Conf MEL. You can also see the latest version of the Schedule Grid. 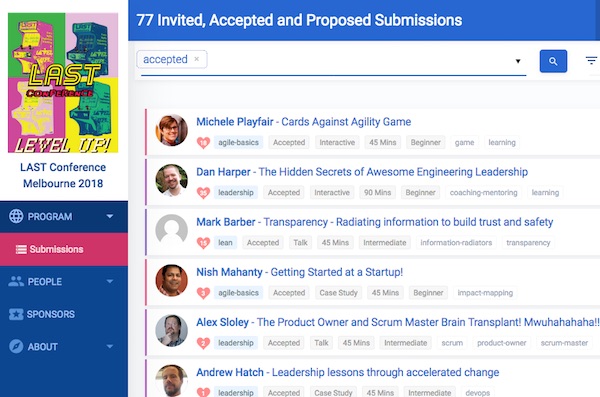 A large percentage of sessions will be run on both days, so you will have a second chance to catch a session, if it clashes on the other day. We’re playing tetris with the timetable right now, but should be finished in the next few days.

A lot of Registrations have already been snapped up. Hurry, we always sell out, so don’t miss out and… 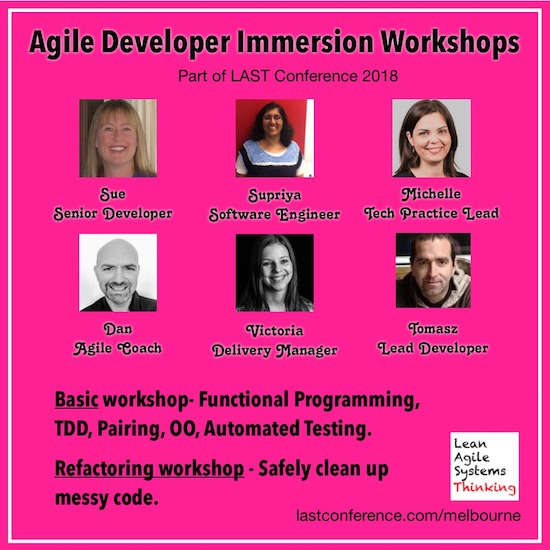 We’ve run Developer sessions inspired by the Coderetreat format for a couple of years now. In 2018, we are back with not one, but two sessions and we’ve changed their name. We have felt that it’s Important to support learning in technical disciplines that are extremely important in agile software development.

Each session will be lead by three highly experienced senior technical leads/developers AND only cost $120.

The Immersions will run concurently on Thursday 19 July. Following the opening session, the Immersions will take the remainder of the day, with breaks synchronised with the main conference. This includes the opening keynote of the conf, breaks and lunch, plus drinks sponsored by Reece Tech, at the end of the day. If you wish to come on Friday, so you can catch some of the sessions in the main schedule, then please purchase a Friday only registration…you won’t pay more than if you got a 2 day rego to the main conference!.

The sessions will be:

We will soon be inviting applications for a number of free seats for students and under-represented members of our community. Please check our Tweets and your inbox for details of how to apply.

Register for a workshop!

As you know, we shy away from swag and don’t include the cost of a conference t-shirt in your registration. However, we do have a t-shirt available for you to buy on our Redbubble page. Returning for 2017, Bruce Taylor has designed an old school arcade game design inspired by the theme of “Level Up”. 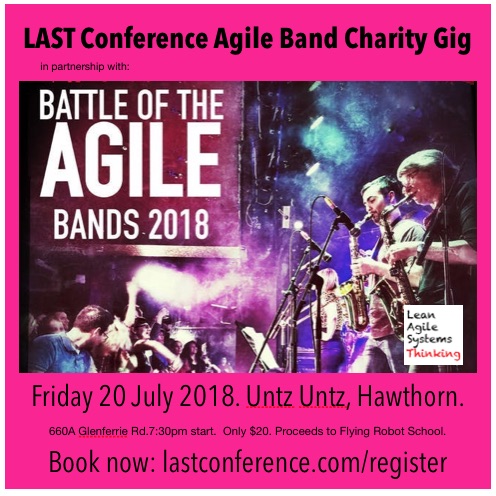 We are massively excited to announce that for the first time, LAST Conference will be hosting a number of bands from the amazing Battle of the Agile Bands. In case you don’t know, this charity fundraising event has run since 2013 and is organised by Nigel Dalton and Tammy Tantschev.

We thought, “Why practice so hard to only play on one night at the BotAB?”. So we are having an encore performance from some of the fabulous bands from the competition. The pressure will be off and they can have even more fun, and so can you. Bands playing are REA’s Hot Property (2017 champions), as well as The Manifesto (Common Code), Sparkle Motion (Thoughtworks), The Accounting Crows (MYOB), and Papercut

It will be a separately ticketed event, after the main conference drinks on Friday 20 July, and held in the band venue Untz Untz, which is above the drinks venue.

We’ll be giving proceeds to the fantastic Flying Robot School, a not-for-profit run by members of our LAST community, Pete Cohen and Paula Ngov (as well as Daryl Wilding-McBride)). FRS teach children in country areas STEM skills, by taking drones out to their schools and teaching them how to program and fly them.

Get a gig ticket

The LAST Conference band night will be a huge knees up to celebrate the agile community in Melbourne, and close LASTconf in style. It is going to be AMAZING!

LAST Conference will also be back in Brisbane, Sydney and Canberra, later in the year. They are all accepting submissions for sessions now!

We can’t keep LAST so affordable and valuable without the support of the following organisations.

LAST Conference is a signatory to The Diversity Charter 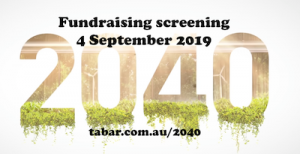 If you would like to support the practitioner communities in Melbourne (also Adelaide, Sydney, Brisbane, and Canberra) please contact us.

LAST Conference grew from these agile and lean meetups in Melbourne Scrum and Agile, Product and Project Managers, Product Owners and BAs.

LAST Conference Melbourne is curated by local practitioners and organised by Tabar.